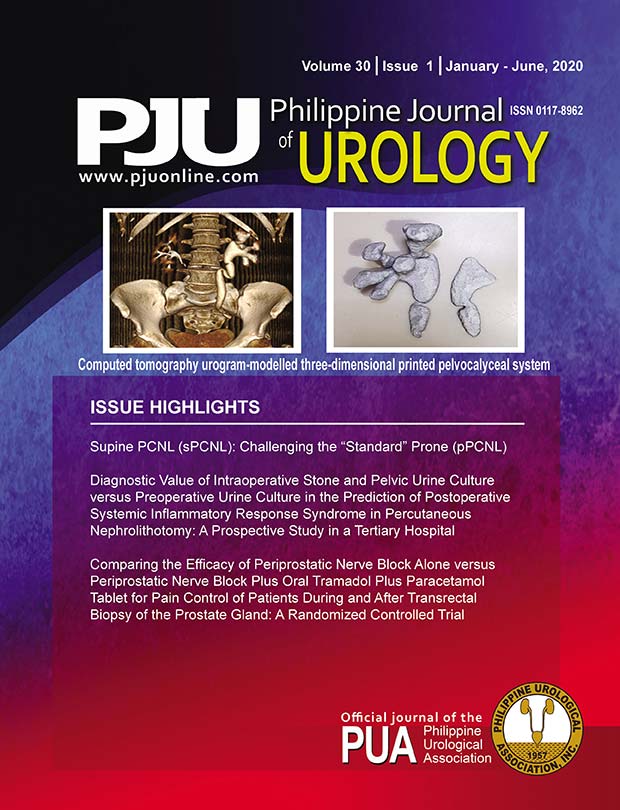 In the field of Urology, flexible ureterorenoscopy (fURS) remains a challenging skill for junior residents to develop due to its steep learning curve. Hence, training models were incorporated into simulation-based training to allow for novice trainees to overcome the learning curve without potentially compromising patient outcomes and minimize complications.

Objective: To describe the design and test the validity of a non-biological three-dimensional (3D) model of the pelvocalyceal system as a tool for simulation-based training for flexible ureterorenoscopy

Methods: This was a prospective, quasi-experimental, surgical innovation research stage 2a study conducted in a tertiary government hospital. The retrograde intrarenal surgery (RIRS) box was composed of four siliconized pelvocalyceal systems which were 3D printed using computed tomography urograms of actual patients. Thirty-two urologists were asked to perform flexible ureteroscopy using the RIRS box and were given a questionnaire to assess face and content validity using the Likert scale.

Results: The RIRS Box training model showed good face and content validity. The 3D printed pelvocalyceal system was judged to have a close anatomical resemblance to an actual calyceal system. While performing fURS, the RIRS box provided similar pelvocalyceal visualization and instrument handling as in an actual procedure. Majority of participants considered the training model useful for training (75%) and believed that it may improve the RIRS technique (46.8%).

Conclusion: The RIRS Box training model may help urologists improve the manner in which they acquire technical knowledge and skills necessary in performing fURS.

This work is licensed under a Creative Commons Attribution-NonCommercial-NoDerivatives 4.0 International License.